Rewilding Apennines and Università Agraria of Castel Madama agreed on a memorandum of understanding to manage a 360-ha land at Bosco della Selva following rewilding principles.

One of the rewilding challenges in the Central Apennines is to present and carry out alternative models to manage the landscape, in contrast with the “classic” use of woodland with the tree cutting to make firewood, or renting the pastures to farmers – who sometimes exceed with the allowed amount of the cattle on a land and they essentially aim to maximize the subsidies gave by the European Union.

What are these alternative models? Following the rewilding principles, let the nature lead makes multiple benefits, not only ecologically speaking, but even from economic and sociocultural points of view. Indeed, when the nature takes back its course, its processes are reactivated, even quite rapidly, restoring those functions that were altered by the anthropogenic impact. This doesn’t happen always spontaneously, because it depends on the impact extent, so sometimes humans can give a kick start to make rewilding begins (let’s think, for example, to the reintroduction of keystone species that were missing in the food chain, or to the dam removal to bring back the river flowing free). In this sense, the regenerative capacities of nature are well known.

Therefore, leaving a portion of landscape to the natural processes allows, for instance, the woodland to self-regulate and to be more efficient to stock carbon; the lack of human disturb makes many species to go back to some places and look for refuge, food and reproduction; the trophic chains are spontaneously reactivated, determining a higher rate of biodiversity, and so on. The good functioning of the natural processes guarantees a series of ecosystem services that are useful to humans, such as the climate mitigation made by the wood, a stronger stability of soil, a wider presence of wildlife that allows to activate certain recreational circuits etc.

The Rewilding Apennines team, being aware of these opportunities, in the past months has started a relation with Università Agraria of Castel Madama, a few kilometers westward from the rewilding landscape in the province of Rome, to know each other. The Università Agrarie (literally, Agricultural Universities) are institutions created in the beginning of 1900 as associative entities of resident farmers. In Italy they were established in order to guarantee the access to and distribution of natural resources for a collective subsistence through the common rights regulations, especially aimed to manage the woodlands and pastures. Today, Università Agraria of Castel Madama manages a public land of 750 ha of mixed forests, pastures and ecotones that ranges from 350 to 615 m asl. The presence of water points makes this area very interesting for the amphibian populations, like the rare and endemic spectacled salamander. “The Aniene river close by enriches the area not only from the ecological point of view, but also for historical and archeological reasons, as there are several villas from the Roman times”, underlines Nicolò Borgianni, Vulture Field Officer at Rewilding Apennines, who is also native of those places. “The area is also frequented by the Apennine wolf and several individuals of European wild cat; the sightings of Common ravens and Golden eagles are not rare too.”, says Borgianni enthusiastically.

The Università Agraria wanted to start a different kind of managerial path of this landscape, based on rewilding, by reducing at minimum the natural resources usage and imagining a program to give value with a low impact. Moreover, the entity would like that landscape to be recognized as a “natural monument” by the Lazio Region, in order to reinforce the goal of protecting those ecosystems in a long-term vision.

On the other hand, one of the institutional goals of Rewilding Apennines is to spread the rewilding practices even to other territories bordering the rewilding landscape in the Central Apennines, in order to amplify the positive effects of the actions as much as possible, both for the ecosystems and the local communities.

Here, then, is that the meeting of intentions between the two organizations quickly materialized.

“We have been working for months at our best to conciliate the goals of our statute, the regional laws in force in the area and what Rewilding Apennines has proposed. The Università Agraria has the duty to protect the interests of farmers, who are decreasing always more, as well as to keep a dialogue with them in order to collaborate for the protection of the territory and the natural heritage. In this sense and in other perspectives the agreement with Rewilding Apennines finds the basis.”, declare the Chair of Università Agraria Giuseppe Salinetti.

“This is the first time that Università Agraria of Castel Madama signs an agreement to co-manage a portion of landscape with the aim of protecting nature, in the specific that of Bosco della Selva (360 ha), which is the most beautiful for me. The land that we manage is huge, 750 ha in total, and it is always more difficult to carry on this work because of the lack of funds dedicated to entities like ours. For this reason, we welcomed with enthusiasm the proposal of Rewilding Apennines.”, the Chair concludes.

The commitment for the coming years

The memorandum of understanding between Università Agraria of Castel Madama and Rewilding Apennines was signed on 25 June 2022 and includes the co-management of Bosco della Selva with a rewilding approach for the coming 5 years. Rewilding Apennines is committed to work for the ecosystem restoration in order to improve the habitat quality and to boost the presence and movement of wildlife species, as well as the spontaneous return of some species that today are missing, like the red deer and the Corsican hare. In order to study the biodiversity of the landscape, the monitoring of wild flora and fauna will be carried out with direct and indirect methodologies. Also, the barbed wire will be removed to guarantee the free movement of fauna, as well as the clean up of rubbish. A specific attention will be focused on the water points through the restoration of water troughs so they can host amphibian fauna. Moreover, the rewilding actions will aim to improve the refuge habitat of reptiles – and not only them – with the restoration, where possible, of dry-stone walls, which are also an historical element of the landscape. Rewilding Apennines will even place the nesting boxes to encourage the presence of birds and bats.

In addition to this, a communication strategy will be developed to promote the territory and the rewilding initiatives to carry out, as well as an enterprise development plan, in coordination with the local stakeholders and, at the same time, with a look at the international markets. Just to begin, some ecotourist activities will be organized with the involvement of volunteers and environmental hiking guides.

What the challenges are for the future?

Bosco della Selva has not been subject to forest cutting for 30 years and this is already facilitating the natural regenerative processes. However, the common right on pasture is still active in some parcels of the land. From this point of view, the goal of Rewilding Apennines is to promote new rewilding initiatives related to the natural grazing, trying also to build a constructive dialogue with the local breeders and, where possible, to assist them in a transition towards a less invasive approach.

“Our administration” says the Vice Chair of Università Agraria Sara Chicca “intends to keep the common rights active, by always guaranteeing and preserving the principle of the common good; at the same time, we have the willing and the moral duty, as well as the institutional duty, to protect and develop our territory with a look to the future. This is possible only thanks to the collaboration with organizations like Rewilding Apennines”. 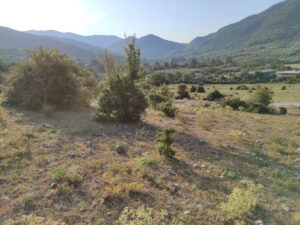 “We are very proud of this agreement with Università Agraria of Castel Madama that allows us to scale up the rewilding actions on a landscape of great naturalistic and historical value, which is external to the current rewilding area but contiguous.”, says Mario Cipollone, Team Leader of Rewilding Apennines. “The conservation of green areas like Bosco della Selva represents a small but significative model of landscape management aimed to contrast the climate changes and the loss of biodiversity.”, concludes Cipollone.

Still poison in the Bear’s Lands

A new step towards the white-clawed crayfish conservation